Ditching HomePod was a strange choice. At the time, Apple told us, “HomePod mini has been a hit since its debut last fall, offering customers amazing sound, an intelligent assistant, and smart home control all for just $99. We are focusing our efforts on HomePod mini.”

While the smart home hasn’t panned out precisely the way Apple or its competition hoped (just ask Amazon), the company never took its eye off that ball. HomeKit — and all it entails — is still a central piece of the company’s strategy, and getting Siri, the Home app, etc. into the home is still an important goal — another key branch of the ecosystem play.

This morning, however, it became clear that the HomePod wasn’t dead. It was just resting. Biding its time. Given that it took nearly two years for that triumphant return — and Apple completely cleared out stock of the old speaker in the meantime — this is apparently a “back by popular demand” situation. The fact of the matter is, however, a good hub is still an essential piece of the smart home puzzle.

Amazon, for example, may have been hemorrhaging money with its Echo play, but that doesn’t mean that getting those devices in the home is a key component of a long-tail strategy (the problem, ultimately, is the question of just how long a tail the people in charge of the money are willing to put up with). HomePod mini, while it has its place, is probably not going to fill that central smart home hub role for everyone. Nor, frankly, does it serve as a great replacement for a home speaker or TV surround sound. Sure, I said the thing has “remarkably big sound” in my review, but that’s relative to its size.

The other important factor in all of this is Matter. The new smart home standard frankly blows the doors wide open for Apple, Google, Amazon, Samsung and the rest. Prior to its stage-one rollout late last year, the world of smart home standards was one of warring kingdoms, with companies duking it out to get their respective “Works With” logos on the back of boxes. Matter is effectively one standard to rule them all. If it works with one, it will work with all.

You can read an interview I did with a Matter exec at CES over here. 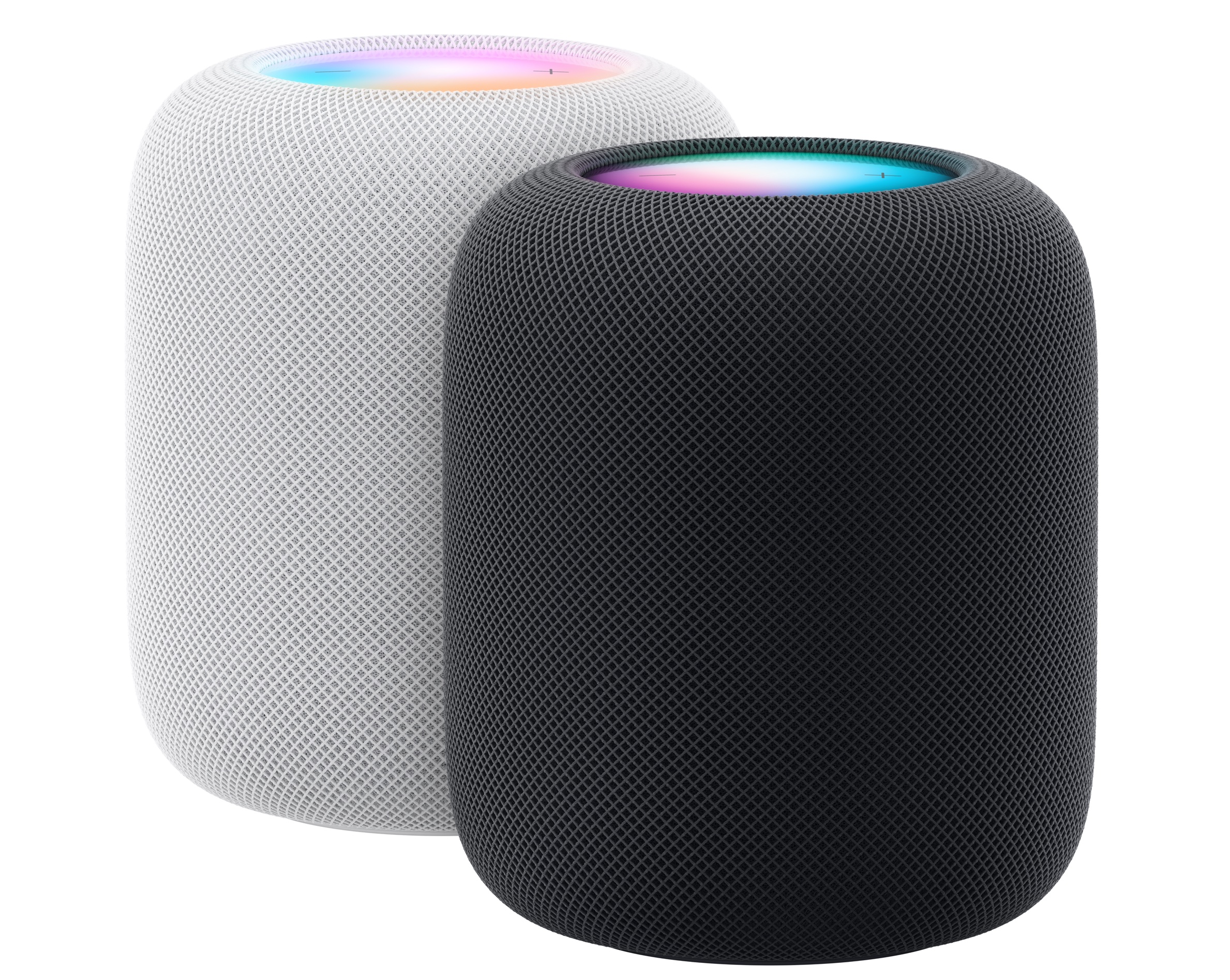 A thing that gets lost in all of this is how effective these devices can be in serving as a kind of catch-all platform for so many different home functionalities, from more complex smart home routines to doubling as an intercom. It also couples with existing features like Find My, so you can check in on a loved one who’s shared their location with you. New features include a temperature and humidity sensor, as well as the ability to detect and alert you when a smoke or fire alarm is going off — a nice little workaround for those who haven’t upgraded to a smart device like the kind Nest makes. It doesn’t include alerts for things like broken glass, however, which feels like a bit of a missed opportunity.

The real value proposition is, however, the same as ever. Unlike most of the competition, HomePod is a speaker first, smart home hub second. That’s not a knock on its smart home bona fides, mind — it’s an acknowledgement that the product is sound-first in a way that few other products in this category are. It was always a gamble in a category that’s been largely defined by ultra cheap, loss-leading devices. Apple knew it was limiting its potential userbase right out of the gate with a $349 price tag for the original. The new product is $50 cheaper, in spite of its advances, but that’s still a far cry from Google and Amazon, which have quite literally been giving away entry-level smart speakers at various points.

I spent some time with the new HomePod (technically “The All New HomePod,” by Apple’s official naming convention) early today. And I can attest to the fact that it sounds really great. The isolation is terrific. The treble is clear. The bass is powerful, without being overwhelming. As a long-time Google Home Max owner, I considered a potential move over (though the move away from Spotify is another question entirely).

The system audio calibrates its EQ based on its location in a room. It utilizes the on-board accelerometer to recognize when it’s been lifted, and then takes about 20 or so seconds to adjust accordingly. That means, in theory, that you’ll get great sound regardless of whether it’s sitting against a wall or in the middle of a room (these are all the sorts of things I’ll feel confident saying once I’m able to bring a review unit home).

Stereo pairing is, once again, a big thing. The footprint is exactly the same as the last one. It’s a big size as far as smart speakers go, but once again, the sound is even bigger. Get two of these things and your home speaker needs are pretty much taken care of. I’m not going to suggest that they’re replacement for truly high-end speakers for the true audiophile set, but as far as normal listeners go, I think most folks will be more than satisfied with a couple of these, be it as standalone speakers or flanking your TV.

I didn’t have the opportunity to A/B test against an older HomePod yet. I’m curious how easy it is to hear the difference in real time. Given how many of the updates here can arrive in the form of software updates, it would be an interesting test.

It’s worth pointing out, however, that the new device is not backward compatible with the last generation when it comes to this feature. It’s presumably a hardware limitation. Though, while I understand why this would be an issue with an uneven match like the HomePod mini, this is frankly a big bummer for those who invested in the previous generation. Even if it’s not a perfect experience, the option would beat starting over from scratch again.

The power cable is detachable for easier movement. There’s still no aux-in port here, which is, again, a bummer. It would be great to, say, plug in a turntable, but Apple’s really all in on a wireless music streaming experience here.