Runway, a startup that emerged from the challenges that faced Rent the Runway’s first iOS team, is now exiting beta and launching its service that simplifies the mobile app release cycle — or, as the team describes it, offers “air traffic control” for mobile releases. The company has additionally raised a $2 million round of seed funding for its product, led by Bedrock Capital.

The idea for Runway comes from co-founders Gabriel Savit, Isabel Barrera, David Filion, and Matt Varghese, who had all worked together on the first mobile app team at Rent the Runway. While there, they learned that getting an app release out the door involves a lot of overhead in terms of time spent and wasted, and a lot of back-and-forth on internal communication apps like Slack. Interdisciplinary teams consisting of engineers, product, marketing, design, QA, and more all have to keep each other updated on their own part of the app’s release process — something that’s still often done using things like shared documents and spreadsheets.

Runway instead offers an alternative with its dedicated software specifically designed for managing the various parts of the app’s release cycle.

The system integrates with a company’s existing tools, like GitHub, JIRA, Trello, Bitrise, CircleCI and others, to automatically update teams as to what’s been done and what action items still remain. Since launching into beta this spring, Runway has doubled the number of supported integrations, which also now include tools like Linear, Pivotal Tracker, Jenkins, GitHub Actions, GitLab CI, Travis CI, Slack, Bugsnag, Sentry, TestRail, and more, with others on the way soon. 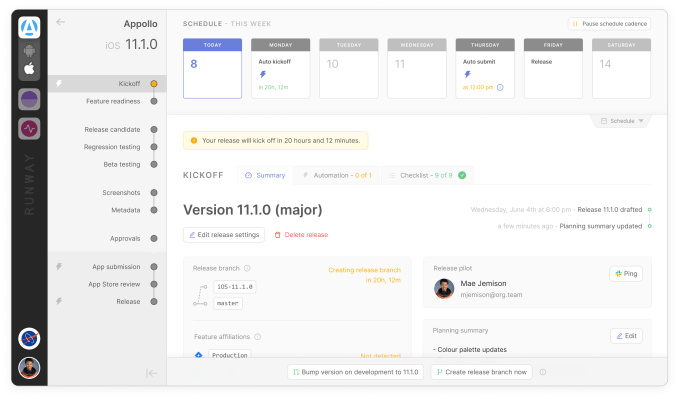 During its test period, Runway has been used by a handful of early customers, including ClassPass, Kickstarter, Capsule and others, who, as of this March, had pushed out over 40 app releases via its platform.

Since its beta, it’s grown its client base to 15 and now includes Gusto, NTWRK, Brex, and Chick-fil-A as customers, as well as some bigger names in at the enterprise end of the scale, the company notes. (One is a “favorite food delivery app,” we understand). Several of these customers have also contributed statements of support for using Runway over their old methods. For instance, ClassPass’s Mobile Lead Sanjay Thakur said the system results in “less confusion” and less time spent on releases.

“Our engineers tell me their load during sprints in the release manager role has shrunk,” Thakur said.

Kickstarter’s Senior iOS engineer Hari Singh noted that “things are easier now” with Runway, and remarked, “it’s nice to have all of our team members looking at the same thing, all the time. There’s no subjective opinion of what’s happening,” he said.

“Runway has not only made releases faster, but mental stress around releases is something we don’t have to worry about anymore,” noted Senior Software Engineer Hari Singh of NTWRK. “We used to be hesitant to release as often as we would have liked. Now, we know it’s going to go smoothly, and we know it’s going to require minimal effort.”

As of today, Runway says its early adopters have since pushed out 60 app releases through its platform. It has also made a number of key product changes and updates since its beta in March. 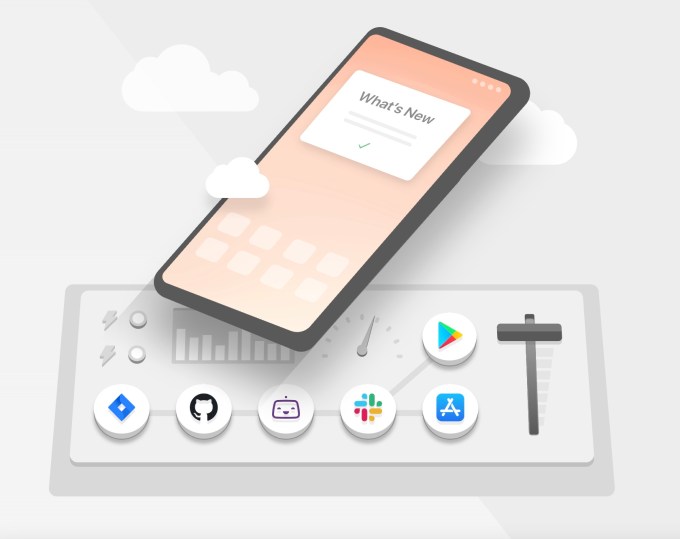 These include the addition of many more automation for tasks that would have otherwise been handled manually or other chores like automatically pausing unstable phased releases, automatically accelerating stable phased releases, adding in default Release Notes for the app stores’ “What’s New” section, support for rollouts with automatically increasing staged percentage (including Android), selecting the latest build in the app stores, submitting new builds for beta review on iOS, tagging release at the end fo the release cycle, autogenerating changelogs, attaching artifacts, adding missing labels or fixing versions to tickets in project management tools, and more.

One area it’s still working on is simplifying the onboarding of new customers. Because it’s designed to be a broad platform, the initial setup process where a customer connects Runway to its many internal apps and services can take time. However, Runway believes that ultimately, its ability to adapt to many teams’ different tools and processes will be a selling point, not an obstacle to its adoption.

As it goes to launch, Runway continues to charge $400 per month per app for its standard tier but has now added on custom, enterprise pricing for larger businesses, as it has more companies on the high-end in the pipeline. It may add new pricing for indie teams in the future, we’re told.

Runway says it will apply the new funds to hiring, including the hire of multiple full-stack engineers (particularly ex-mobile engineers), and a full-time employee to help with growth and marketing. It has already made its first full-time hire with the addition of a form senior mobile engineer.