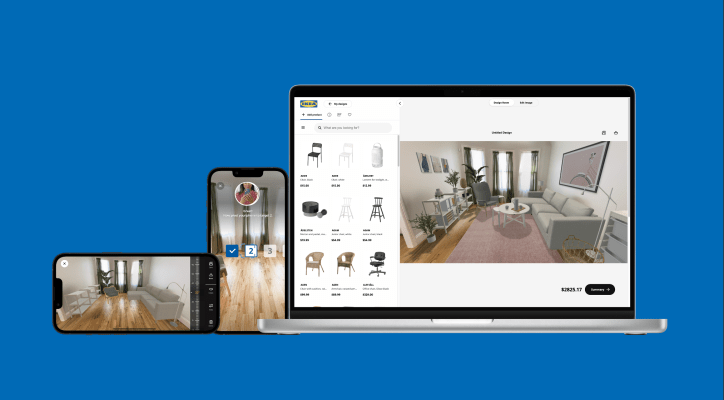 Today, IKEA is launching a new AI-driven interactive design experience called IKEA Kreativ for IKEA.com and the IKEA app. With the new feature, U.S. customers can design and visualize their own living spaces with digitalized furniture on their smartphones instead of traveling to the brick-and-mortar store where they are likely to be distracted by the warehouse-shaped labyrinth of showrooms, blue shopping bags, and Swedish meatballs.

Currently, the IKEA Kreativ feature is available on LiDAR-powered iPhones and iOS devices as well as desktops. It will be coming to Android devices later this summer. The AI (Artificial Intelligence) experience is expected to launch in additional countries in September, however, there are no exact launch dates.

With IKEA Kreativ, the company continues taking steps toward digital transformation. According to IKEA, it is the home retail industry’s first fully-featured mixed-reality design experience for lifelike and accurate interior design, bridging the gap between e-commerce and in-store customer journeys.

Virtual home design platforms aren’t new. In fact, the Swedish retailer was one of the first furniture companies to ride the AR wave in 2017 with its IKEA Place app. The app works with Apple’s ARKit to allow customers to scan a room and place an IKEA chair, bed, etc., in the space. There is also visual search tech that recommends similar furniture when a user scans an item that already exists in their home. Amazon, Wayfair, Target, The Home Depot, Overstock, Houzz, and others have implemented AR apps to help clients design a room with purchasable products, too.

But IKEA Place only allows you to do so much. It is essentially like Amazon’s “View In Your Room” feature as it’s designed to see how furniture will appear in a room when looking through your phone camera. This can still be useful, though, so IKEA says users will still be able to use the separate IKEA Place app alongside the updated IKEA app.

Customers have the choice to design their own spaces or pick from over 50 3D showrooms that are either fully furnished, semi-furnished, or empty rooms. Also, IKEA Kreativ can erase existing furniture from an image, so you can start from scratch in a space that already exists. There has yet to be technology where furniture can disappear in real life with just one tap. But it would be nice…

After testing the beta feature, we found that the steps to scan a room took about two minutes, and then it took another five minutes to prepare and upload the image of your room. A traditional AR experience like IKEA Place is faster, however, it will be a less lifelike experience.

The first step involves the IKEA Kreative Scene Scanner, where a user must get the widest view of the room with a smartphone camera. The app instructs you to stand back and center your mobile device, then direct the camera left to right by pivoting with your wrists and keeping your elbows in. By doing this, you need to capture the room in five spots. The second step is to overlap the images by waving the phone in a figure 8 motion. The app then makes you do this a second time after stepping either to the right or left.

While we found this tedious, it produced accurate results, and we were able to design the room pretty easily. Being that this was just the beta, there were a few glitches as well. For instance, when opening the test catalog, the app did kick us out a few times. Hopefully, this won’t be the case at launch.

Once existing furniture is erased, users can begin designing the blank canvas with real-world scale furniture from the complete IKEA catalog, including its ergonomic home office chairs, decently priced rugs, and those LED wall lights you see all over Instagram. Yes, that’s right — you can digitally mount objects to your walls too.

Users can place several items since they can be stacked and moved around. While there are over 12,000 items in IKEA’s catalog, the amount of furniture that can be placed in one design is limited, of course.

Any products selected can then be added to the shopping cart or saved to an IKEA account for later. There is also the ability to share a finished design with friends, family, or even with an interior designer at IKEA.

“We’re working hard to help people imagine a better life at home by fusing real technology advancements with fun and magical user experiences,” said Brian Totty, CEO, and Founder of Geomagical Labs, in a statement. “We are super excited to share our first products and look forward to making these capabilities even more helpful and awesome in the years to come.”

Parag Parekh, Global Chief Technology Officer at IKEA and co-acting Chief Digital Officer at Ingka Group, added, “Ingka Group is passionate about helping people create a better life at home, and we continuously look to add value to our customers’ experience, both on and offline. Through the innovative, intuitive technology of Geomagical Labs and simple digital experience, we believe IKEA Kreativ will break down barriers to shopping for home furnishing, empowering people to go from inspiration to reality and design their perfect home.”

IKEA Kreativ was first tested in April 2021 by one million customers and received “phenomenal” customer feedback, Parekh told TechCrunch. He also said there was a lot more in the pipeline for the feature, which includes working on a way to change paint colors on the wall without, you know, actually taking out a paintbrush.

Apple Posts First Quarterly Revenue Drop Since 2016 Amid Weak iPhone Sales During Holiday Season
Dizo Watch D2 With 120 Fitness Modes, Hybrid Aluminium Frame Launched in India: All Details
How to Report a User on Your PS5
Check Twitter in paradise with Iridium’s new ‘executive’ satellite hotspot
Twitter to Share Ad Revenue With Some of Its Content Creators, Says Elon Musk