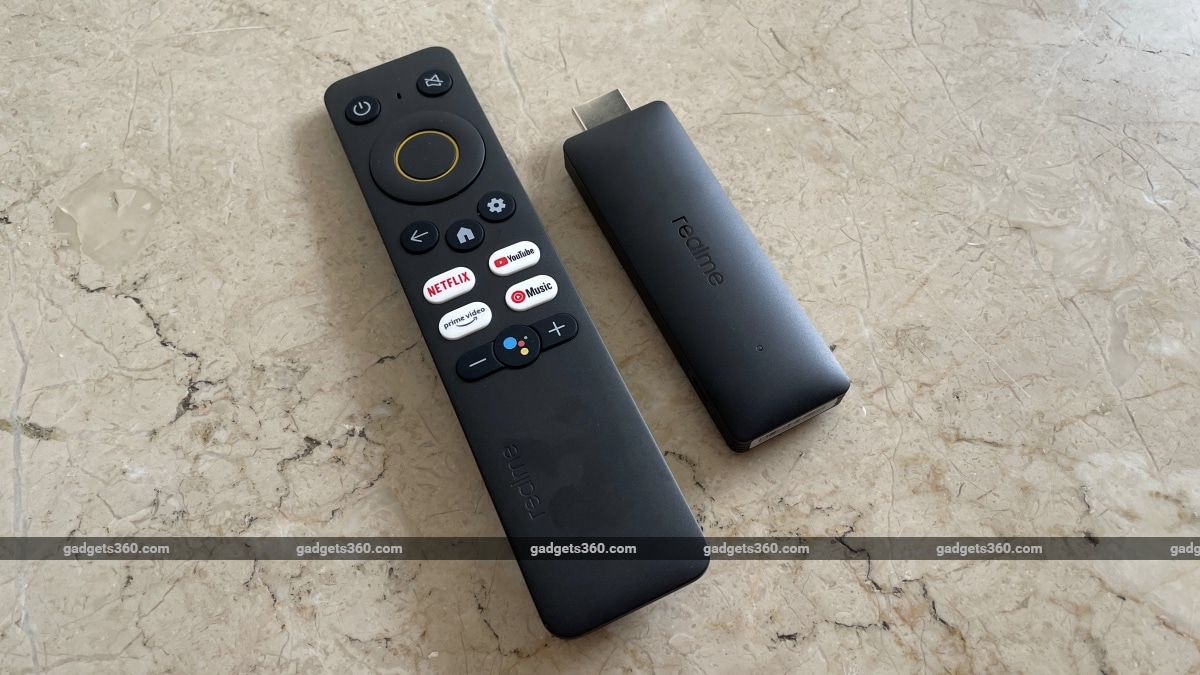 With so many new televisions having built-in smart capabilities even in the budget segment, you’d think there isn’t much need for a streaming device anymore. However, a lot of people are still using old non-smart televisions, smart TVs with limited capabilities, or a smart interface that doesn’t quite work as well as it used to. In such cases, a good streaming device will let you enjoy the benefits of up-to-date smart functionality, without having to upgrade your otherwise functional and expensive television.

Among the newest affordable streaming devices in India is the Realme 4K Smart Google TV Stick, which is priced at Rs. 3,499. With a small form factor, Ultra-HD and HDR streaming capabilities, and the Google TV user interface, this is among the most compelling options you can buy for less than Rs. 5,000 right now. Does it live up to expectations? Find out in this review.

Much like the Amazon Fire TV Stick 4K and Mi TV Stick, the Realme 4K Smart Google TV Stick is a small, plain device that plugs directly into an HDMI port on your TV and will hopefully be out of sight for the rest of its life.

The streaming stick has an HDMI plug and a Micro-USB port for power, and comes with a USB cable and wall adapter for you to plug it in. I was able to power the Realme TV Stick directly using a USB port on my TV during the review, but this meant that the device would take a few seconds to boot up after the TV was turned on. It’s recommended to use the wall adapter when possible for a stable power supply that is independent of the TV.

Also included in the sales package is an HDMI extender, a remote control, and AAA batteries to power the remote. While the device should be able to plug in to most televisions directly, the extender might help in some situations, such as when the TV is wall-mounted and space at the back is limited, or if ports are very close to one another since the stick is quite wide.

The Realme 4K Smart Google TV Stick supports HDMI 2.1, and can stream content at up to Ultra-HD resolution at 60Hz. Additionally, it can handle high dynamic range content up to the HDR10+ format. There’s no Dolby Vision HDR, but Dolby Audio is supported. The device is powered by a quad-core CPU, and has 2GB of RAM and 8GB of internal storage for apps and app data. It uses Wi-Fi and Bluetooth 5 for connectivity.

As with most standalone streaming devices, the Realme 4K Smart Google TV Stick comes with a full-fledged Bluetooth remote. It’s quite similar to the remotes that ship with the Realme Smart TV range, with controls to navigate the interface, adjust the volume and settings, and hotkeys for Netflix, Amazon Prime Video, YouTube, and YouTube Music. The remote is powered by two AAA batteries.

There is HDMI CEC support on the Realme 4K Smart Google TV Stick, and this worked well for me when using it with a Hisense Android TV. While I was able to use the Hisense remote to control the Realme TV Stick for most functions, the home key was a notable exception; pressing this went back to the television’s home screen rather than the Realme device’s home screen, which made navigating a bit more difficult when not using the Realme remote.

The Google TV user interface looks considerably different from the stock Android TV UI, but both are based on the Android TV operating system

The standout selling point of the Realme 4K Smart Google TV Stick is its software; this is, to the best of my knowledge, the first streaming device in India running the Google TV user interface, which was launched with the Chromecast with Google TV; the Google Chromecast isn’t officially sold in India yet. The user interface functions on top of Android TV, with the Realme TV Stick running Android version 11. There is also access to the Google Play Store for Android TV, which lets users install any of over 5,000 apps optimised for the big screen.

Many popular apps are preinstalled, including Netflix, Amazon Prime Video, Disney+ Hotstar, YouTube, and also various Indian streaming services including MX Player, Alt Balaji, Zee5, Sun Nxt, and Sony Liv. Usefully, you can uninstall most of these apps if you don’t need them. The hotkeys on the remote work as expected to launch the apps on the interface. The apps themselves are exactly the same as I’ve seen on Android TV devices; Google TV simply changes the way the interface looks, and how you access apps and content.

Google TV is considerably different from the stock Android TV user interface in that it puts content at the forefront and offers curation and recommendations that help you pick something to watch quickly. Of course, like before, you can always go directly into specific apps if you already know what you want. This is similar to Xiaomi’s PatchWall user interface, although the curation is considerably less India-focused and more general in nature.

There are large banners for content, curated lists for categories, the ability to mark specific movies and TV shows as part of your ‘Watchlist’, and easy guidance for how to access watchlisted content. While the system will try to recommend a way to stream content for free, in some cases you might be taken to Google Play Movies to rent or buy titles. You can also pause and continue watching content from various apps directly through the Google TV user interface.

Content and curated recommendations are the focus of the Google TV user interface, but you can always go straight into the app of your choice

A key aspect of Google TV is its integration with various streaming services, with the system detecting which ones you have installed and offering content recommendations based on that. I found recommendations from Amazon Prime Video, Disney+ Hotstar, Apple TV, and MX Player. Oddly, Netflix wasn’t integrated into the system, so I couldn’t see any curation that included Netflix content. I could, of course, simply launch the Netflix app and watch whatever I wanted, but this lack of integration in India was a bit of a letdown.

Apart from the user interface, the settings and other menus also have a changed look. However, the operating system is still Android TV at its core, and functions exactly as such, with even the Google Play Store looking practically the same as on televisions and streaming devices with stock Android TV.

The device itself was responsive and worked as expected for me; although it wasn’t an exceptionally quick or smooth experience, it definitely wasn’t slow or buggy. I did, however, experience some issues with HDR streaming; for instance, I couldn’t play HDR content at Ultra-HD at 60Hz on two televisions that I tried the Realme TV Stick with. Reducing the frame rate to 30Hz at Ultra-HD fixed this, but it’s definitely a bug that Realme ought to look into and attempt to fix with a software update.

It’s also worth pointing out that my review unit inexplicably stopped functioning properly soon after completing the testing process, but before the publishing of this review; the user interface failed to load up or allow access to the Settings menu, even when I tried the device on three different TVs. I was able to complete this review using a second unit sent by Realme, but the cause of the issue with the first unit remains unknown.

The Realme 4K Smart Google TV Stick is unique in that it offers access to the Google TV user interface which is still very uncommon. However, in most other ways, this is an ordinary streaming device, even for the price. Although you do get the convenient form factor, Ultra-HD streaming, and HDR10+ support, the lack of Dolby Vision is a bit disappointing. Google TV’s lack of Netflix integration for recommendations in India is also worth pointing out here, although this isn’t a flaw of the Realme TV Stick itself.

It’s worth considering this device as an alternative to the Mi Box 4K which has similar capabilities, if the more convenient form factor of the Realme device is appealing. However, if you can bump up your budget a bit, the Amazon Fire TV Stick 4K remains our top pick in the segment thanks to Dolby Vision support, and you could also consider the newer Fire TV Stick 4K Max.

Realme India CEO Madhav Sheth joins Orbital, the Gadgets 360 podcast for an exclusive wide-ranging interview, as he talks about the 5G push, Make in India, Realme GT series and Book Slim, and how stores can improve their standing. Orbital is available on Spotify, Gaana, JioSaavn, Google Podcasts, Apple Podcasts, Amazon Music and wherever you get your podcasts.
This article was originally published by Ndtv.com. Read the original article here.
Share on Facebook
Share on Twitter
Share on Pinterest
Share on LinkedIn