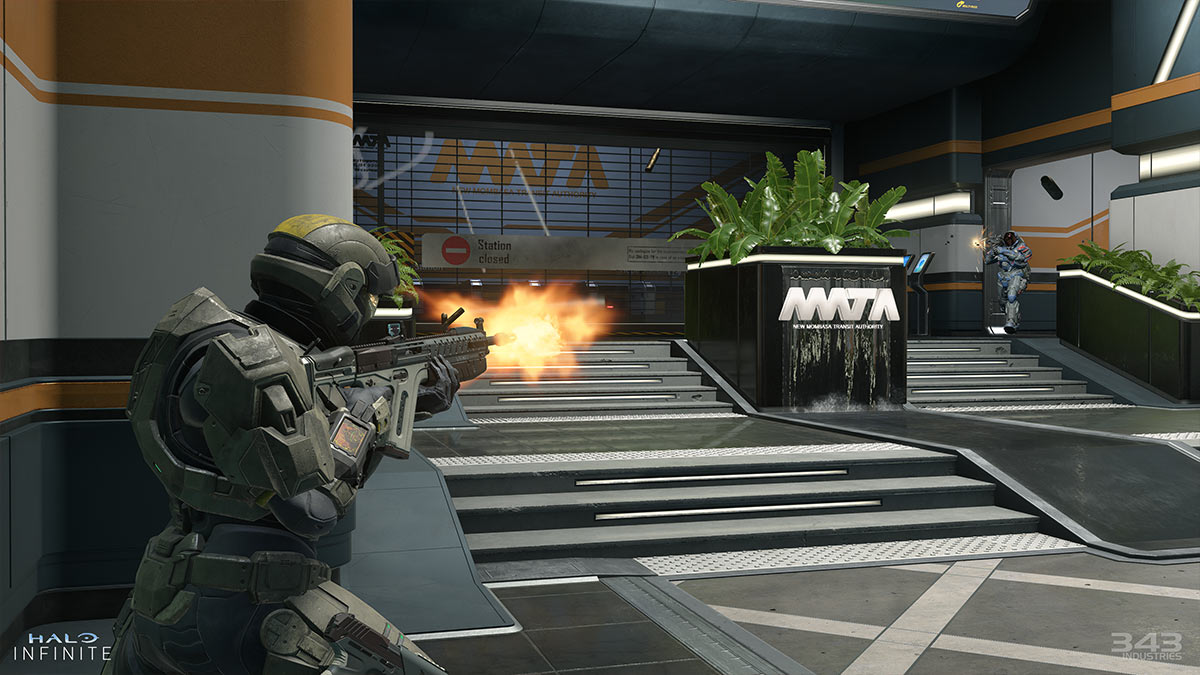 Halo Infinite brings back Xbox’s most iconic game after six years. The Halo franchise began in 2001 — as a launch title for the OG Xbox — and ever since, people have gone bonkers playing some of these titles. Halo Infinite had a surprise launch for its free-to-play multiplayer mode on November 15, alongside the 20th anniversary of Xbox. But the Halo Infinite single-player campaign only releases later this week — Tuesday, December 8 to be specific — and we’ve had the pleasure of spending some time with it ahead of release.

The new Halo game costs Rs.3,499 on Steam and Rs.3,999 on Microsoft Store, Xbox One, and Xbox Series S/X. The 343 Industries-led game will also be available to everyone with an Xbox Game Pass subscription on day one. You can already pre-load the game. In terms of download size, the Halo Infinite single-player campaign will eat up about 50GB of space on your PC, while the multiplayer mode of Halo Infinite weighs in around 26GB. Halo Infinite multiplayer supports crossplay, so Xbox and PC gamers can play together.

Let’s begin with what your PC rig needs to play the new Halo title. Halo Infinite gives you four different graphics requirements ranging from the bare minimum, which can be achieved by using a GTX 1050Ti or a Radeon RX 570 with around 4GB VRAM, to Ultra settings which requires a beasty Nvidia RTX 3080 or AMD Radeon RX 6800XT with about 10GB VRAM. As for the CPU, you will require an Intel i5-4440 or an AMD Ryzen 5 1600 to get started at the minimum required level.

In order to play Halo Infinite on Medium settings, you will require —

The recommended specifications to play Halo Infinite are as follows —

Halo Infinite provides you with an array of options to tweak around to get the most optimal and stable performance out of your PC rig. The game lets you set field-of-view (FOV): the default value is set at 78 and this can be maxed out at 120. Lower angles can help you reduce the fishbowl effect and lower the risk of motion sickness, while higher values provide you with a wider view of the battlefield but with distortions along the edges.

Fortunately, the game supports a resolution multiplier, which means you can play the game in 4K despite playing it on a 1080p monitor. Keep in mind, this can affect performance as it puts more pressure on the graphics card. Luckily, you get to keep an eye on that in the Halo Infinite settings menu itself.

Halo Infinite provides you with four different graphics preset choices: starting with “Low” and moving up the ranks with “Medium”, “High”, and “Ultra”. It also provides you with an option to set minimum and maximum frame rates. The game allows you to tweak a number of settings, including minute details such as Terrain Quality — a higher value enables better terrain geometry across the map, gives more detail to structures, and increases quality at a distance while also reducing sudden pop-ins. This has an effect on VRAM, so tread lightly.

You can also mess around with Dynamic Wind — the higher the value, the more it affects the area and complexity of the wind effects. Dynamic Wind is set to off on the Low preset. Talking about wind effects, Halo Infinite allows you to enable or disable wind streaks — these are the wind lines that appear while you are sprinting in-game.

Halo Infinite also allows you to fiddle with Simulation Quality. As the name suggests, you can manually set the definition of the Vehicle audio and Vehicle suspension system among other things. This consumes more CPU power in order to reduce game artefacts. Halo Infinite also allows you to select the quality of decals, such as bullet holes, footprints in the mud, tyre tracks, explosion scorches, and more. A higher value increases the number of decals that persist — this does not have a major effect on system resources.

You can also manually set the effects quality if you are seeing any kind of drops in the statistics. Lower quality, as you guessed, will disable non-essential effects to maintain performance. Halo Infinite also allows you to enable or disable Async Compute. This feature basically allows the supported GPUs to run most of the computing tasks and perform graphics in tandem. Essentially, it is supposed to help prevent screen tearing and is also said to increase performance in some devices.

However, players on Halo Infinite beta have mentioned that enabling Async Compute has caused their games to crash. Hopefully, this will be fixed before launch.

Besides this, you can of course play around with the blur, sharpening, screen shake settings. Unfortunately, Halo Infinite decided to skip out on FidelityFX Super Resolution, also known as FSR and DLSS. Both are upscaling technologies that help boost performance while also preserving details in the visuals.

As mentioned before, Halo Infinite provides you with four graphics presets. With the graphics option set to “Low” preset, the game managed to push out a maximum of around 78–80fps while dropping down to 67fps. It managed an average of around 68fps for most of the gameplay. The drops were recorded mostly during big fights and explosions.

Moving up the ladder, we switched the graphics option to the “Medium” preset. This setting managed to pump out a maximum of 71fps in Halo Infinite, with dips to 47fps during gunfights and grenade explosions. It managed to maintain its performance with an average of 65fps.

The “Medium” preset warmed up our rig for the next graphics option: the “High” preset. This setting started building up the pressure — still, we were able to manage an average of 60fps, and maxed out at 65fps. However, we did see massive dips to 34–35fps during close combat and heavy explosions in Halo Infinite. This would result in a discernible slowdown during combat, as you would imagine. Unfortunately, I was not able to test the ‘’Ultra” preset since this was maxing out the VRAM over 7GB.

Should you buy Halo Infinite on PC?

As you might have expected, Halo Infinite demands a lot from your hardware in terms of graphical prowess. The game is definitely worth buying, especially for fans.

With all the options set to low, you should be able to milk out a decent and sustainable performance on a budget PC gaming rig. I did not face any issues or bugs of any sort during my time with Halo Infinite. The game never crashed on me either. It ran smoothly throughout, as I traversed across the battlefield.

As for combat, everything seemed to be in line — all the shots registered properly. Halo Infinite is a decent buy if you have the hardware to support it. You can pick it up for Rs. 3,499 on Steam or Rs. 3,999 on Microsoft Store. Halo Infinite will also launch day one on Xbox Game Pass Ultimate that costs Rs. 699 per month.

Halo Infinite is out December 8 on PC, Xbox One, and Xbox Series S/X.