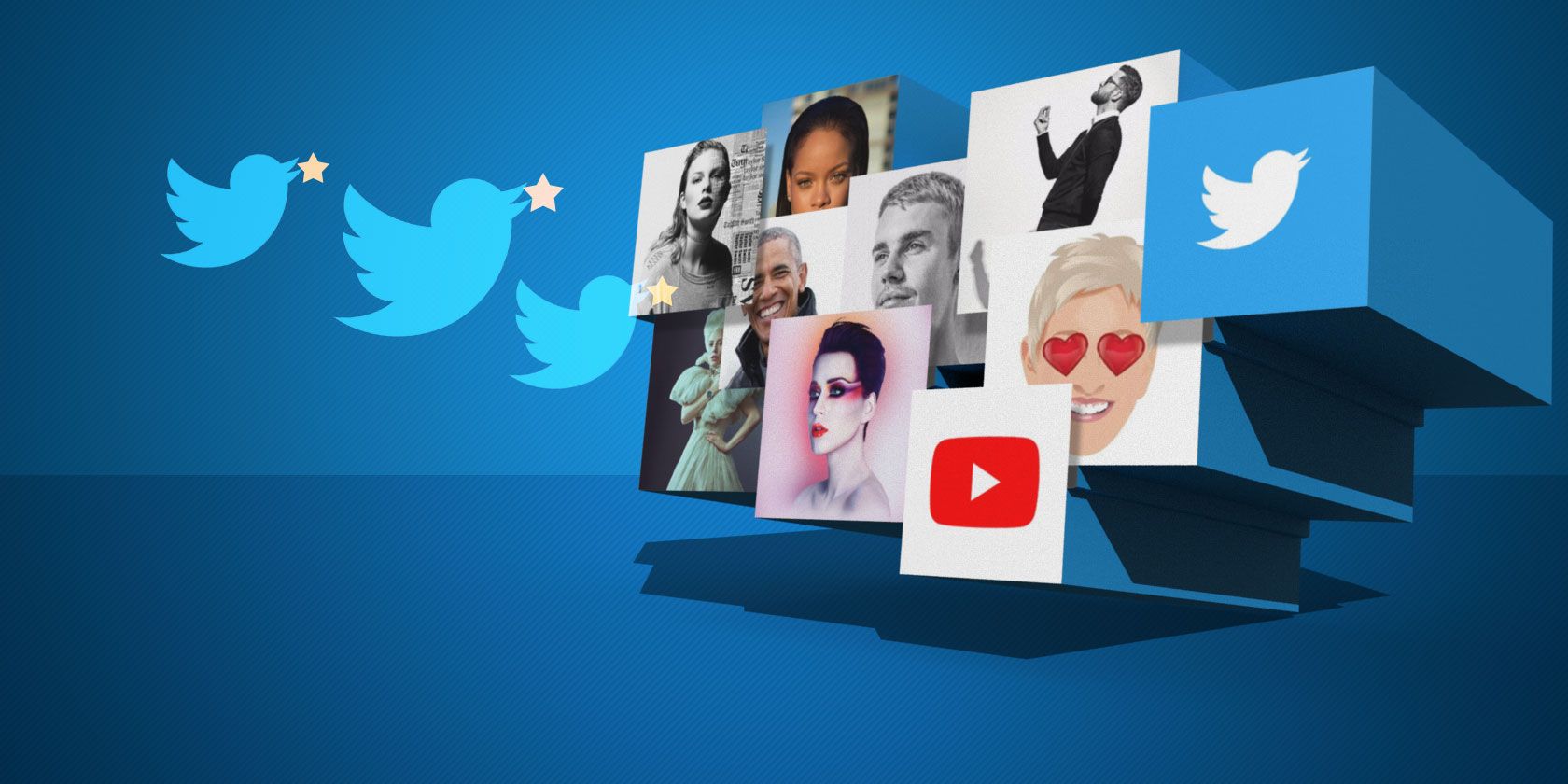 Below, we count down the top 10 Twitter accounts with the most followers. You’ll learn who the biggest names on Twitter are, plus a bit about them to help decide if they’re worth following. Note that, while accurate at the time of writing, these follower counts are subject to change.

YouTube regularly tweets short video clips and links to new videos. In 2021, it’s mostly been promoting YouTube Shorts, which are bite-sized videos similar to those on TikTok. In between these are the typical cringey quips that corporations use in an attempt to be relatable.

If you want regular updates about what YouTube recommends you watch, this is a decent place to start. But you’ll have to put up with some corporate cheese too.

Ellen DeGeneres is a comedian and TV host best known for her popular talk show, The Ellen DeGeneres Show. She’s also known for voicing the character Dory in Finding Nemo and its sequel Finding Dory.

Ellen is a fun show, and that extends to her Twitter page. Most of her tweets are clips from recent episodes of the show, including compilations of various moments with a specific guest.

If you don’t watch The Ellen Show regularly but still enjoy its content, following this account is a good way to keep up with Ellen.

Stefani Joanne Angelina Germanotta, better known by her stage name Lady Gaga, is an influential singer who’s also dabbled in acting. In 2008 she released her first album The Fame, which included the big single “Poker Face.” Several albums and hit singles later, she’s become one of the best-selling artists of all time. She also regularly engages in charitable work.

Gaga’s Twitter page mostly consists of pictures of herself, promoting her various ventures, and amplifying causes she supports.

Do you like Lady Gaga’s music and have an interest in her activism? If so, she’s worth a follow on Twitter. Otherwise, you probably won’t care about what she posts here.

Ariana Grande became well-known for her acting on the Nickelodeon shows Victorious and Sam & Cat, after which she broke into the music industry as a pop singer. She’s now one of the best-selling musicians in the world, with a number of accolades including the most-streamed female artist ever.

Like many others on a similar path, Grande is also an activist and involved in fashion and cosmetics.

If you enjoy Ariana Grande’s music or other efforts, her Twitter account is a great place to keep up with those. Like most celebrities, though, you won’t care about her account if you’re not already a fan.

Taylor Swift is another musical sensation who has enjoyed widespread popularity for many years. Swift got her start with country music, though her recent albums have experimented with other sounds, like pop and indie. Aside from music, Swift has also done a bit of acting, plus an autobiographical documentary film.

Most of Taylor Swift’s tweets focus on her music. At the time of writing, this includes the re-release of her album Red after the controversy surrounding the ownership of the master recordings.

If you enjoy seeing pictures and video clips of what Taylor Swift is up to, give her account a follow. If you don’t care for her music, there’s not much else to love here.

Cristiano Ronaldo is a Portuguese soccer (football) player for Manchester United and Portugal’s national team. He’s one of the best-known athletes in the world and is considered among the greatest soccer players of all time.

Ronaldo’s Twitter account contains pictures of his training and games, video highlights, links to sponsors and his own business ventures, and similar. Some of them are in Portuguese, but many are in English.

Robyn Rihanna Fenty, known professionally as Rihanna, is another top singer and songwriter. Along with Ronaldo, she’s the only other top 10 Twitter account not from mainland North America; Rihanna hails from Barbados.

Her third album, 2007’s Good Girl Gone Bad, made her a star with the single Umbrella. Rihanna has since earned many awards for her music and is the wealthiest female musician in the world as of 2021.

In addition to music, Rihanna is involved in activism and owns several lines of products. Her Twitter timeline is mostly comprised of promotions for these brands.

Katheryn Elizabeth Hudson, better known as Katy Perry, is an acclaimed singer with a net worth of over $125 million. She’s yet another one of the best-selling artists of all time, having released several smash-hit singles and albums. Her Super Bowl halftime performance in 2015 is the most-watched of all time, and she’s been an American Idol judge since 2018.

Perry’s Twitter account is a little more diverse than the other musicians we’ve looked at. It contains links to brands she’s involved with, upcoming music, and her other life work.

If you can’t get enough Katy Perry or just want to see what such a popular musician is up to, you should enjoy her account.

Justin Bieber holds quite the set of internet accolades. The love-him-or-hate-him singer is the #10 most-followed user on Instagram, #2 here on Twitter, and his music video for “Baby” is still one of the most-disliked YouTube videos of all time. It’s certainly an accolade to break the 100 million follower mark, at any rate.

Most of Bieber’s recent tweets are pictures from his musical and personal lives, promotions of upcoming tours, and musical snippets.

A man who needs no introduction, Barack Obama was the 44th President of the United States. Before becoming President, he served as an Illinois state senator and US Senator. During his time as President, Obama tweeted officially using the @POTUS handle. Since this account rotates when a new President takes office, Obama now uses his personal account.

Now, Obama tweets about political causes, including his own Obama Foundation. He’s climbed his way to the top of the Twitter ladder, with a sizeable lead over the runners-up.

If you were a fan of Obama as President and want to see what he’s up to after leaving office, this is the account for you.

We initially published this list in November 2017, so it’s interesting to compare how the most-followed Twitter accounts have changed in four years.

Of the top 10 Twitter accounts from the original list, eight of them are still on the leaderboard. Only Twitter’s official account (now in 17th place) and Justin Timberlake (now #15) didn’t make the cut. Ronaldo and Grande are the two newcomers to take their place.

In the 2017 list, Katy Perry took the #1 spot with 105 million followers, while Justin Bieber had 102 million followers of his own at the time. Obama was in third with 96.2 million, so it’s curious how the top three have shuffled over the years.

We’ve taken a survey of the most popular accounts on Twitter. But just because an account is popular doesn’t mean it’s the best. You probably know of several Twitter accounts that aren’t as huge but are still definitely worth following. In fact, most people won’t care about the top 10 Twitter accounts unless they already like these personalities and brands.

Ben is a Deputy Editor and the Onboarding Manager at MakeUseOf. He left his IT job to write full-time in 2016 and has never looked back. He’s been covering tech tutorials, video game recommendations, and more as a professional writer for over seven years.