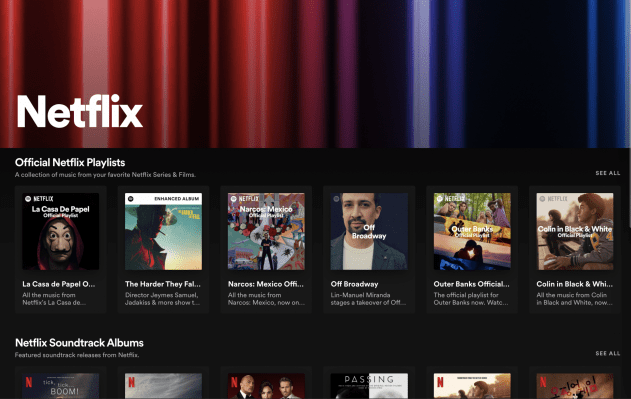 Looking for the soundtrack from your favorite Netflix show? Now, it will be easier to find thanks to an expanded partnership between Netflix and Spotify. The streaming music service today introduced a new “Netflix Hub” on its app, which will offer a centralized place for finding the official soundtracks, playlists, and podcasts for top shows and movies on Netflix.

It will also include Netflix-tied podcasts, like Okay, Now Listen, Netflix Is A Daily Joke,10/10 Would Recommend, You Can’t Make This Up, and those that delve into popular shows, like The Crown: The Official Podcast or Behind the Scenes: Shadow and Bone, and more.

Other music and fan experiences will be a part of the new destination as well, including an enhanced album for the Netflix Western film, “The Harder They Fall,” which offers fans a behind-the-scenes look at the creation of the soundtrack led by Jay-Z. In addition, there’s a content destination for “La Casa De Papel (Money Heist),” Part 5 Volume 2, and a character matching experience where fans get to play a game to find out which “La Casa De Papel” character they are –which feels a bit like a playing a BuzzFeed quiz.

The hub builds on Spotify and Netflix’s existing partnership, Spotify tells TechCrunch. The two companies have worked together on many official playlists, including most recently, the enhanced album for “The Harder They Fall,” which had been available before the Hub’s debut. They also had worked on the “Money Heist” content experience and the character-matching game ahead of today’s news.

Netflix didn’t purchase access to have a hub on Spotify’s app. In other words, it’s not an ad product, nor did any money exchange hands here. Instead, both companies see the potential in working together to serve their respective fan bases, where there’s naturally a lot of overlap.

Netflix is not the only major company to debut a thematic “hub” on Spotify’s app. Recently, Spotify and Peleton announced a similar partnership that introduced a “Curated by Peloton” Workout Hub featuring playlists from Peloton instructors. And outside its app, Spotify earlier this year partnered with GIPHY to introduce users to music via artists’ GIFs.

Making some of this Netflix content exclusive to Spotify may make sense for the streamer as the other large music and podcast provider on the market, Apple (via Apple Music and Apple Podcasts), is also now a Netflix competitor through its Apple TV+ streaming service. Spotify, at least as of yet, hasn’t expanded into Netflix’s core market, which makes them better suited as partners.

Spotify says that it plans to roll out more exclusive content to the Netflix Hub in the months ahead.

The Netflix Hub will available to all users, both Free and Premium, in the U.S., Canada, Australia, New Zealand, the U.K., Ireland, and India.