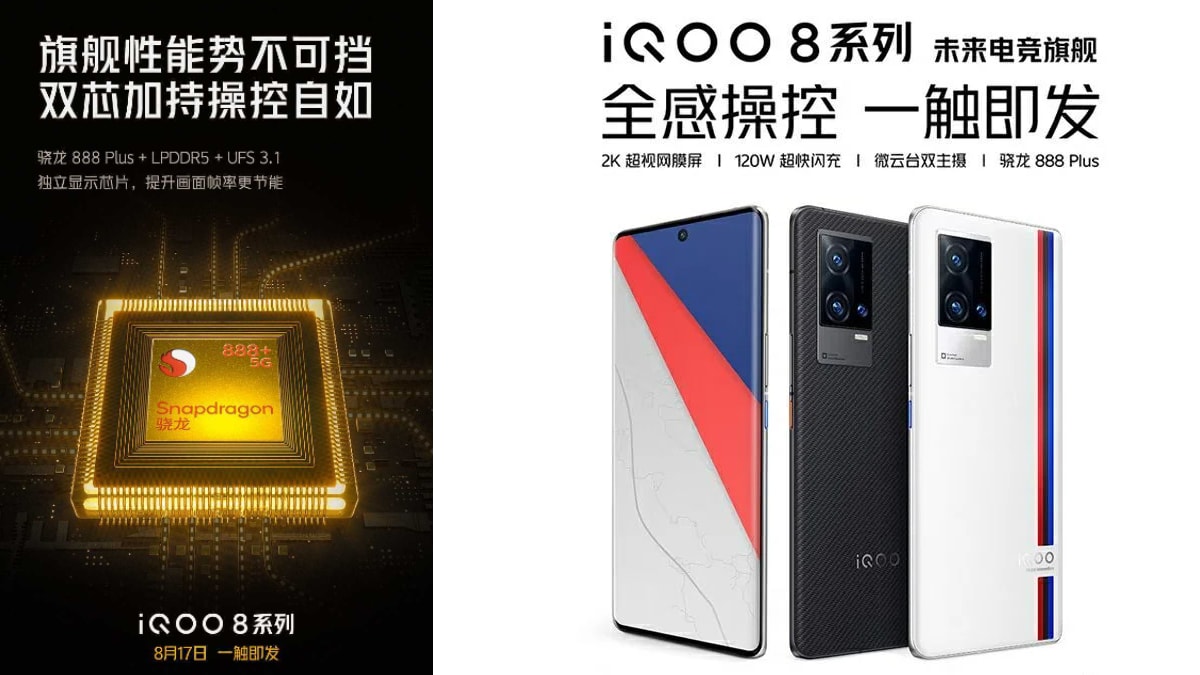 iQoo 8 series is going to launch on August 17. The range will include two phones – the basic iQoo 8 and the iQoo 8 Pro. Ahead of the launch, key specifications of the phone have leaked, and some have even been confirmed officially. The iQoo 8 Pro model is also reported to come in a BMW Motorsport Edition with a striped design and a textured panel. The phone is confirmed to be powered by the Qualcomm Snapdragon 888+ SoC.

The company has taken to Weibo to announce the launch of the iQoo 8 series in China. The latest teaser poster confirms key specifications. The phone will be powered by the Qualcomm Snapdragon 888+ SoC and pack a LPDDR5 RAM. The iQoo 8 series is also teased to offer UFS 3.1 storage.

In addition, tipster Bald Panda has leaked on Weibo that the iQoo 8 may feature a flat display with a hole-punch cut out in the top centre. The phone is likely to support 120W fast charging and is likely to be suitable for gaming. The tipster reiterates that the phone may be powered by the Snapdragon 888+ SoC.

The tipster has also leaked the poster of the iQoo 8 Pro BMW Motorsport Edition (via GizmoChina). The poster shows that the phone may be unveiled in a black carbon fiber variant as well. The Pro model is seen to feature a curved edge display and the rectangular camera module at the back is seen to include three sensors. Two large sensors are seen to be accompanied by a small one. The poster tips the iQoo 8 Pro to include a 2K Retina display and 120W fast charging support.

Apart from 120W fast wired charging and 2K display, the iQoo 8 is rumoured to come along with 12GB of RAM and 256GB of onboard storage. The smartphone is also said to run on OriginOS 1.0 based on Android 11.

Can Nothing Ear 1 — the first product from OnePlus co-founder Carl Pei’s new outfit — be an AirPods killer? We discussed this and more on Orbital, the Gadgets 360 podcast. Orbital is available on Apple Podcasts, Google Podcasts, Spotify, Amazon Music and wherever you get your podcasts.