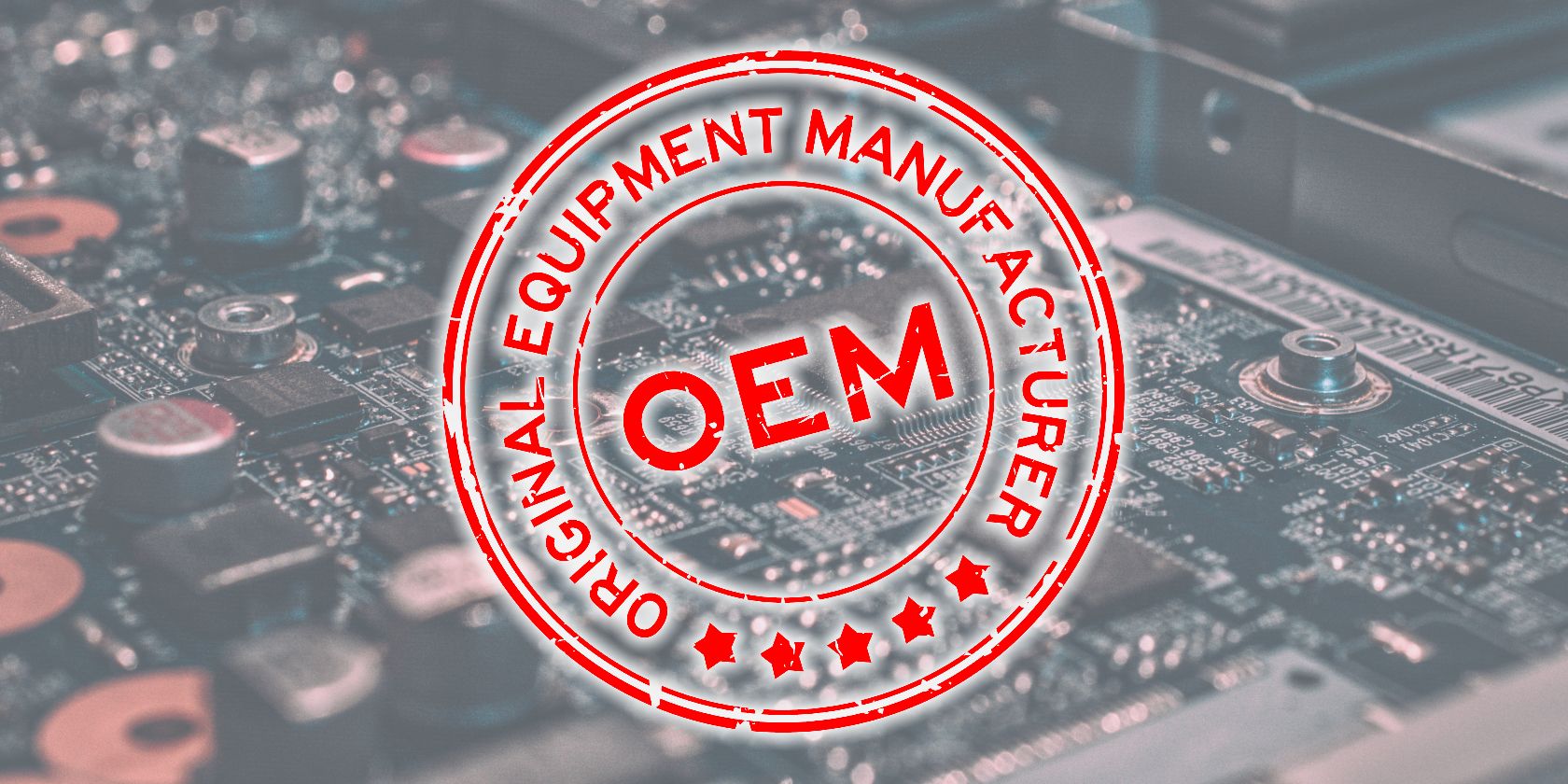 Which may make you wonder: should you buy an OEM product, or is there a catch that’s setting you up for trouble? The truth is that they do differ from retail products, and it’s important to know the differences.

What Does OEM Mean?

As mentioned, OEM stands for Original Equipment Manufacturer. The acronym isn’t commenting on who sells the product but instead on who the product is meant to be sold to.

OEM hardware and software is packaged for distribution to companies who build systems, like Dell and Apple. These companies are the original equipment manufacturers.

For example, Dell will buy processors from Intel and graphics cards from AMD, then assemble them into pre-built PCs. Dell buys directly from the manufacturer in bulk through routes not accessible to the average consumer.

This is why OEM products are usually sold in a generic box or wrapper instead of retail packaging. They’re not designed to be on store shelves, so they don’t need to look fancy and contain the usual marketing spiel.

Usually, OEM products don’t appear in stores—at least, larger retail stores will rarely sell them. Online stores don’t care about retail packaging, however, so they’re more than happy to stock up on these products and sell them to customers.

There aren’t specific online stores that sell only OEM products. Instead, keep your eye on reputable sites because they might sell them off if they have an abundance of old stock they need to ship. Normally, these should be tagged as OEM, so you know what you’re getting.

These retailers know that there are plenty of bargain hunters looking for the lowest price possible. Don’t worry. It’s entirely legal to buy an OEM product. But there are stipulations attached to the product which you accept by purchasing it.

How Does OEM Work for Hardware Products?

OEM hardware is exactly the same in capabilities and performance as its retail counterpart. Storage drives, optical drives, and PCI expansion cards are the most common types of components offered for sale as OEM. But many other products may be offered this way in limited numbers.

However, the hardware usually doesn’t ship with extra components, even those critical to the hardware’s operation. OEM computer processors, for example, may not ship with fans. An OEM video card or hard drive often doesn’t ship with the cables or adapters needed to use it. That’s because a usual OEM buyer will secure these in bulk separately.

There may also be restrictions on the warranty. When compared to a retail warranty, the length offered might be reduced or non-existent. This is because it’s expected that the system manufacturer will provide it. For example, if the AMD graphics card in your Dell computer malfunctions, you contact Dell for support, not AMD.

Since buying an OEM part makes you the manufacturer, you may find it impossible to receive direct support.

How Does OEM Work for Software Products?

Windows is the most common example of OEM software and is often snapped up by people building their own machines, but there are also OEM versions of security suites, system utilities, and productivity software.

When you buy this software, you are usually provided only with a sleeve that contains the software and a license key. Don’t expect to receive any documentation. In fact, most OEM licensed software comes with no tech support.

OEM software is usually licensed on a per-system basis, which means that you can’t install it on another computer. In theory, this means that an OEM version of Windows is tied to the specific computer build you install it on (usually to the motherboard), but Microsoft is famously kind-hearted about this.

Re-activating Windows just requires contacting Microsoft customer service. You might need to do this to remove the Windows 10 watermark.

But Microsoft doesn’t have to do that, and other companies might be more restrictive. It’s a risk you take with OEM products. It costs less, but you might have to re-purchase the software if you replace your PC or upgrade the motherboard.

Is Buying OEM Worth It?

Buying OEM hardware or products is perfectly safe and legal, but you need to be aware of the risks.

You can usually save a decent amount of money with OEM products, but you might find yourself entirely without support if you run into an issue. That could be fine if you’re technically minded; if you’re not, the retail version might be the better choice.

The amount of discount you can get will vary depending on the product and retailer. For example, OEM anti-virus software is usually 25 percent to 50 percent cheaper. Some utility software enjoys similar discounts.

The main issue you’ll run into is public availability. Most developers only offer a retail version of their product.

Hardware is more hit-or-miss. Sometimes you’ll be able to save decently by going with OEM hardware. However, you might find that buying the extras missing from the hardware, like the cables or fans, makes up the money saved.

Sometimes, the OEM hardware can be more expensive than retail. This usually happens when it’s entering the end of its lifespan. Spare stock is sometimes put up for sale as an OEM part and then sold for as much or more than retail.

Make a quick price comparison before making your choice. Know exactly what is and isn’t coming with your purchase. And be confident that you’ll be able to get support if needs be.

Build Your Own PC With OEM Products

That’s everything you need to know about OEM products. Safe to buy and often cheaper, but be wary of the lack of support you’ll receive.

Chances are you’re looking at OEM products because you want to build your own computer. If that’s the case, be sure to use a custom PC builder or deals website to ensure you get the cheapest components.

Joe was born with a keyboard in his hands and immediately started writing about technology. He has a BA (Hons) in Business and is now a full-time freelance writer who enjoys making tech simple for everyone.