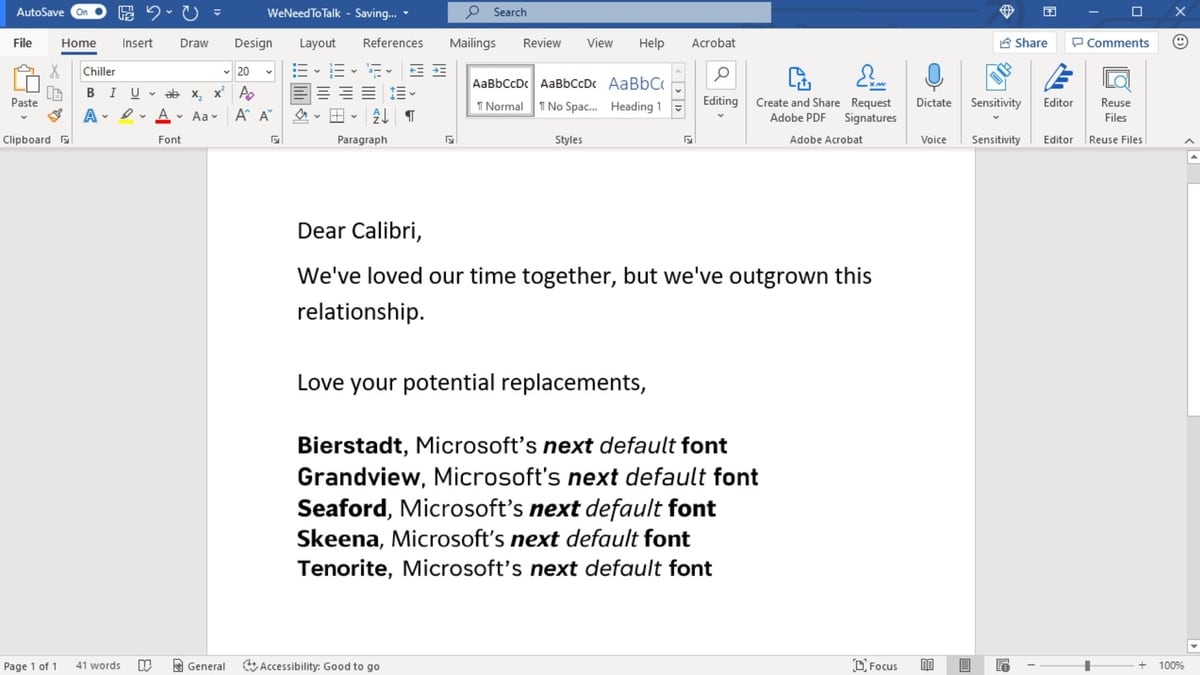 Microsoft is adding five new fonts to its Office Suite. The Redmond-based technology giant is planning to replace Calibri as its default font for the first time since 2007 when it changed it from Times New Roman. Microsoft also announced that one of the five new fonts — Bierstadt, Grandview, Seaford, Skeena, and Tenorite — will eventually replace Calibri and is asking for users’ opinion in selecting the next default font over the coming months. All five font families are available to download through Microsoft Support website.

Through a post on its blog, Microsoft announced five new font families for its Office Suite apps. Bierstadt, Grandview, Seaford, Skeena, and Tenorite are various styles of sans serif fonts and are available to download through Microsoft’s Support website. Microsoft is also asking its users to contribute feedback and provide comments on Twitter. The company also mentioned that if users don’t like the chosen default font, they can change it from the preferences in any of the Microsoft Office Suite apps.

Beirstadt is a “precise, yet contemporary sans serif typeface inspired by mid-20th-century Swiss typography,” while Grandview has been designed to be “legible at a distance and under poor conditions,” as per the company. Seaford is described as “rooted in old-style serif text typefaces and evokes their comfortable familiarity.” Skeena “typeface inspired by mid-20th-century Swiss typography.” Tenorite has the “overall look of a traditional workhorse sans serif, but with a warmer, more friendly style.”

Earlier this year, Microsoft announced that Office 2021 and Office 2021 LTSC versions will be released sometime this year. However, Microsoft hasn’t given an exact rollout timeline nor has it given any details about any new features. It is a successor for Office 2019 and the Long Term Servicing Channel (LTSC) version will bring dark mode support across multiple apps like Excel, Outlook, PowerPoint, and Word.

We dive into all things Apple — iPad Pro, iMac, Apple TV 4K, and AirTag — this week on Orbital, the Gadgets 360 podcast. Orbital is available on Apple Podcasts, Google Podcasts, Spotify, and wherever you get your podcasts.
Affiliate links may be automatically generated – see our ethics statement for details.
This article was originally published by Ndtv.com. Read the original article here.
Share on Facebook
Share on Twitter
Share on Pinterest
Share on LinkedIn