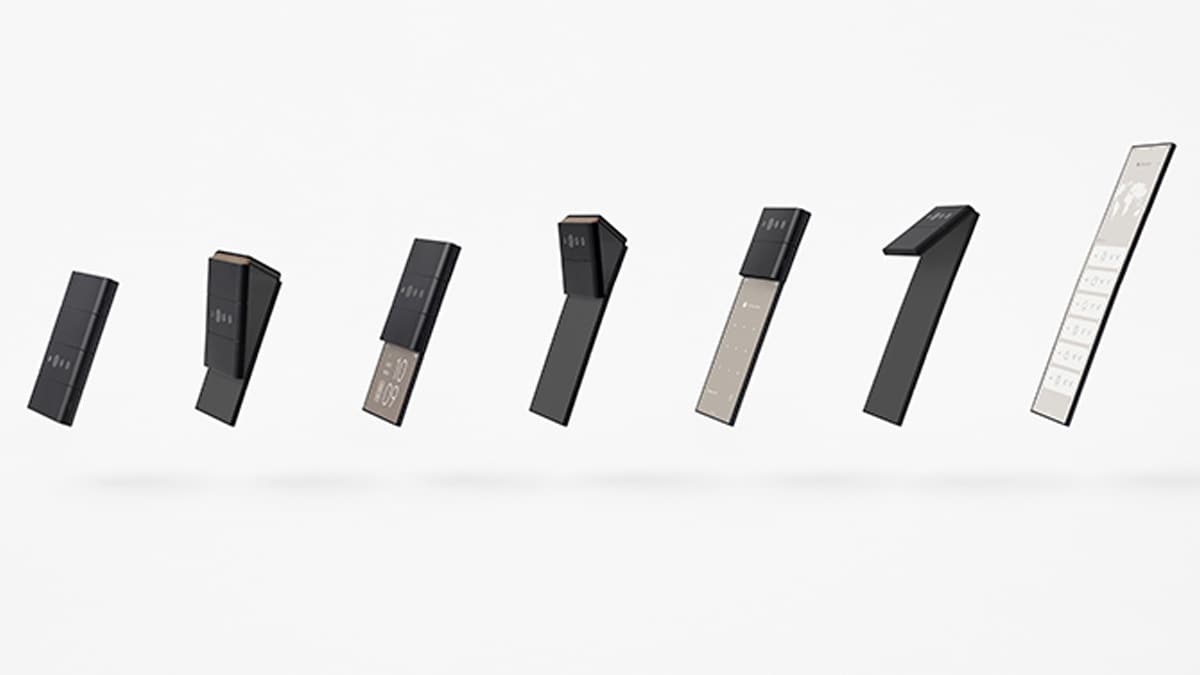 Oppo, in partnership with Nendo, has shown off the ‘slide-phone’ and ‘music-link’ concept devices at the fourth China International Industrial Design Expo (CIIDE). The Chinese smartphone maker teamed up with Japanese design firm Nendo to dream up two concept devices that focus on classical design and convenience. The ‘slide-phone’ concept phone has three foldable screens that lets you use the phone in multiple forms, depending on what you want to do. The ‘music-link’ TWS earphone concept includes a collection of devices such as a smartwatch, AI speaker, portable charger, and wireless charger — all centred around it.

Oppo shared the development via a press release, and a series of tweets. However, the demo videos best explain how these concepts work. The concept of the ‘slide-phone’ is based around a triple-hinge foldable screen system. When fully folded, it’s shown to be the size of a credit card. The first unfold is expected to reveal 40mm of the display, that should be enough for simple tasks such as checking notifications, call history, or accessing the music player controls.

Unfolding it the second time is expected to reveal 80mm of the display for taking selfies. The third unfold reveals the entire screen, that is ideal for gaming, multi-tasking, or watching videos. The ‘slide-phone’ concept is also shown to have an inbuilt stylus for jotting down notes. Physical buttons on the sides are shown to have multiple functions, depending on what level you unfold it. Towards the end of the video, we see the phone being slid into a charging dock and some of the panels are also shown to have different colours, indicating that the outer panels can be customised. It certainly looks very cool but you have to remember that for now, it’s just a concept video at best.

Oppo and Nendo also showed off the ‘music-link’ concept via Twitter that revolves around a pair of TWS earphones, which can function differently based on the accessory you pair it with. Once again, the video does the best job of explaining Oppo’s vision for this product. The TWS earphones are designed so that it can be clipped together to form an ellipse. In this form, you can carry them around as a pendant around your neck.

There’s provision for plugging in a neck strap, thereby making them neckband earphones. The earbuds can also be placed around a smartwatch, that appears to power the watch itself, although it’s not clear why a user would want to do this. The video then goes on to demonstrate the charging case, that can be docked on top of a wireless speaker, not only for charging the earphones but also to switch audio playback from the earphones to the speaker. The video ends by showing the different ways in which the earphones and the charging case can be charged via special accessories.

It’s hard to say if either of these concepts will ever make it to production, in their current form anyway. But that’s not to say Oppo doesn’t have wacky products in store for us next year. Late last month, the company showed off Oppo X 2021 smartphone featuring a rollable OLED display that can extend the display size from 6.7 inches all the way to 7.4 inches. I don’t think we’ll all be using foldable phones in any hurry but it’s nice to see manufacturers still experimenting and trying out new concepts, keeping innovation alive.