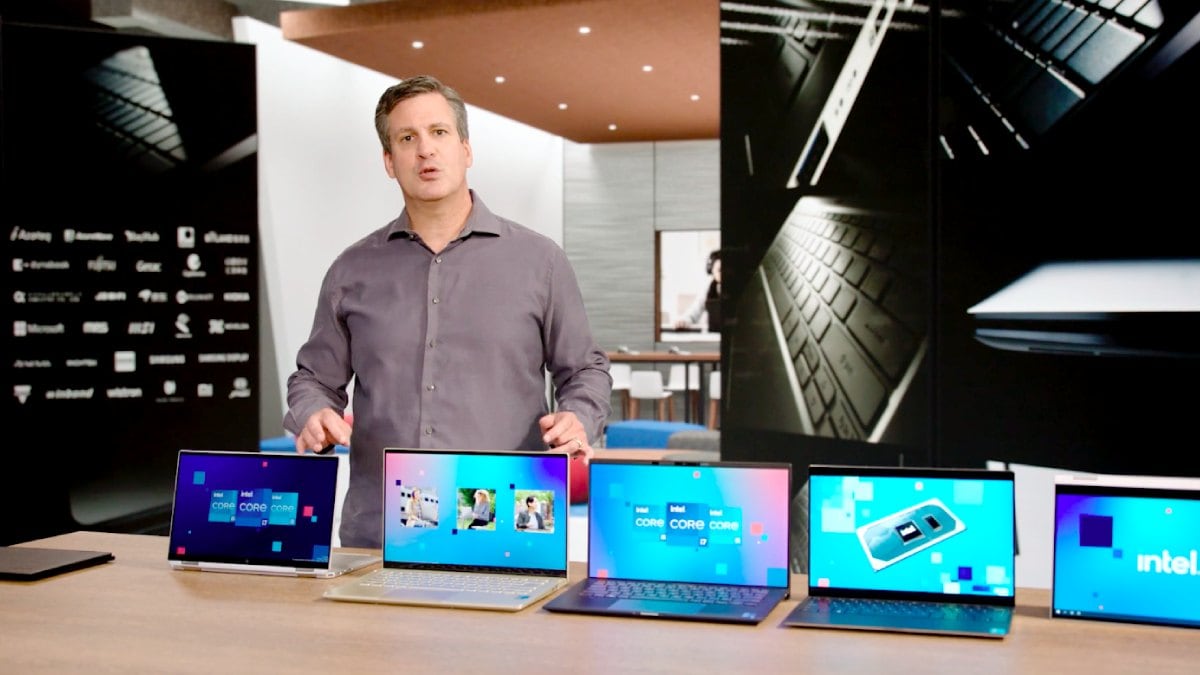 Laptops from multiple manufacturers hitting the market later this year will bear Intel’s new ‘Evo’ branding, which is meant to signify that they are premium ultraportables that have gone through extensive testing and validation at the design stage. Intel will also be rolling out high-profile marketing and advertisements to promote these laptops. Readers might recall a similar effort called Centrino in the early 2000s which was used to promote laptops with Intel’s earliest Core processors and Wi-Fi controllers. More recently, the terms Ultrabook and 2-in-1 were coined to describe slim and convertible laptops, but haven’t really been marketed as brands.

Evo is the name that we will see for laptops that manufacturers are designing in partnership with Intel through an initiative called Project Athena. This was first announced in early 2019, and it is essentially an effort to fine-tune performance and experiences by involving the entire supply chain. Intel has identified “mobile go-getters” as the target buyers for Evo laptops.

Does this matter to you and me, when we go to buy a new laptop? We chatted with Chris Walker, Corporate Vice President and General Manager, Mobile Client Platforms Group, Intel Corporation, to understand this. In Part 1 of our interview, we discussed the 11th Gen ‘Tiger Lake’ Intel Core CPUs, and here in Part 2, we’ll be covering everything else that goes into creating the Evo platform. 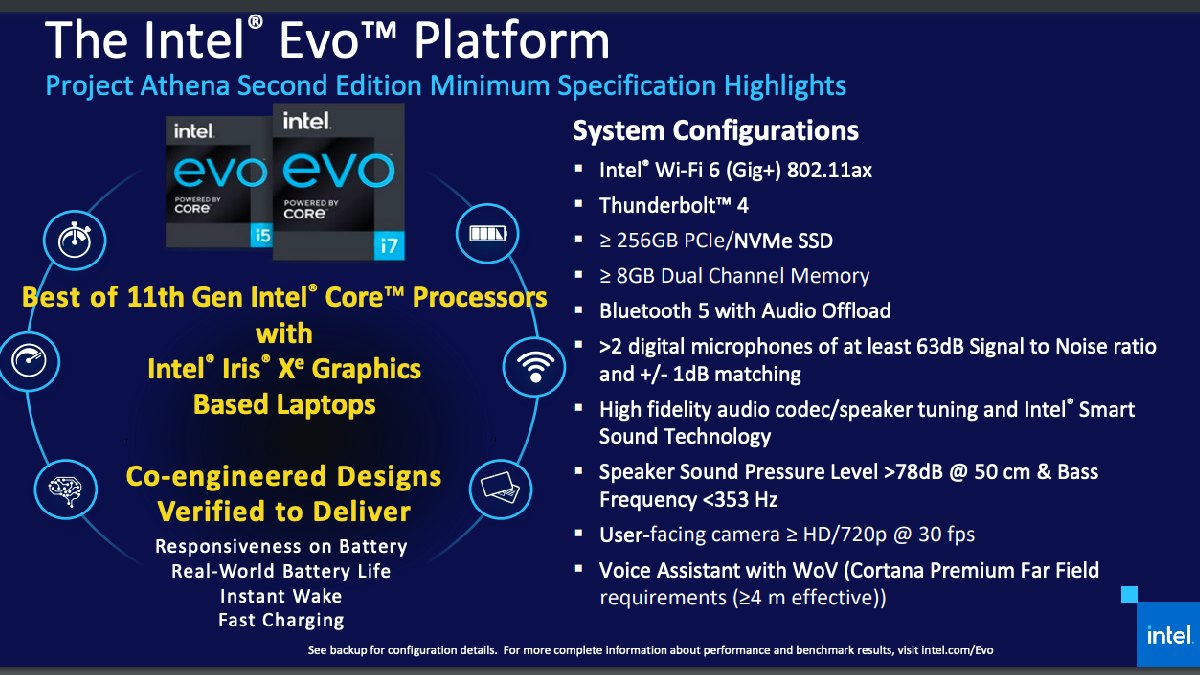 First of all, what qualifies a laptop for the Evo badge, and how will buyers know what sets them apart? Are there specific hardware requirements such as Optane Memory for storage acceleration, and will there be a list of features and capabilities that buyers can check?

Walker gave us an idea of what’s to come. “Yeah, I think through our Evo landing page, we will have parts of what we measure against. Responsiveness; 9+ hours of battery life [with a full-HD screen]; instant charge; [a high] screen-to-body ratio; connectivity. We don’t require Optane, but it’s recommended. Every Evo system has Thunderbolt 4 for its Type-C ports and Intel Wi-Fi 6 because we can offer the best in Gig+ speeds. Every Evo system has to do Type-C fast charging, and we do things to modernise the chargers that go with them.”

“There are some things that are pretty fixed in terms of what [an Evo laptop] has to have,” he said, but added, “We do allow for battery life differences between a full-HD screen and 4K screen, as most people understand and accept that difference. Our goal is to continue to drive power down for things like 4K displays.”

This new badge will be Intel’s focus for campaigns, and Intel will be promoting Evo laptops heavily. “I expect over time more and more premium systems will be Evo branded”, he told us. “We say there will be 50 Tiger Lake laptops for this this winter season; 20 are Evo. These are tested, these are tuned. These go through a lot of in-lab verification. There’s some time and investment [needed], and so it’s not something that goes mass market.” 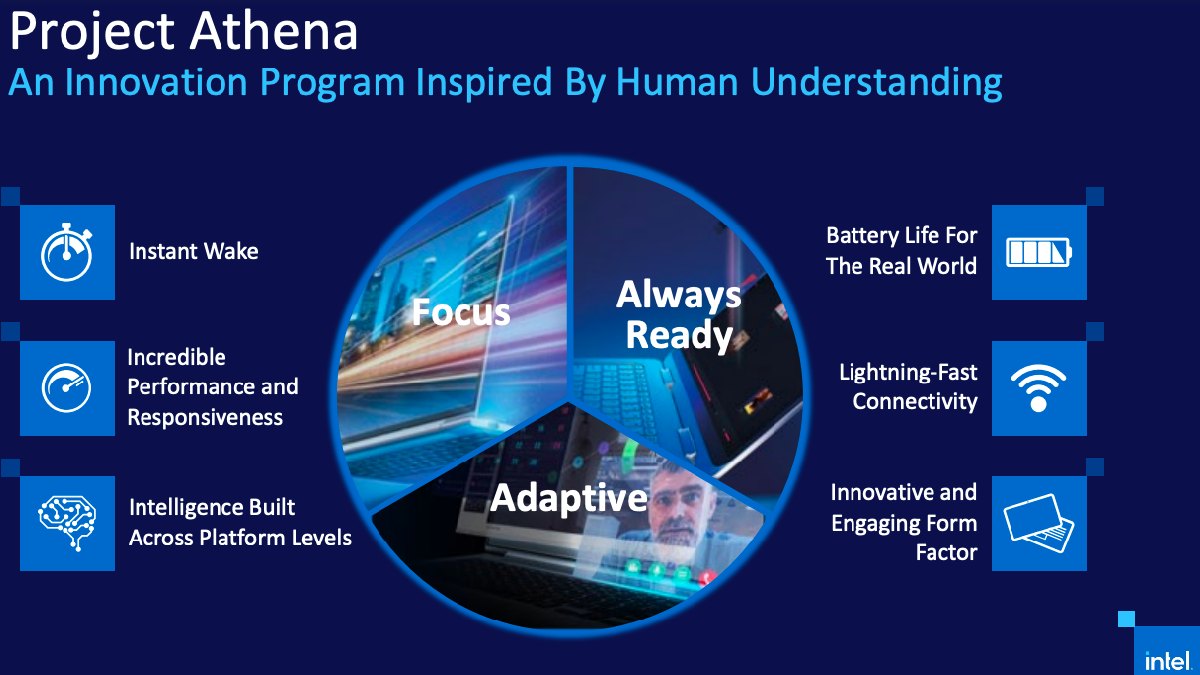 The Evo label will create some new market segmentation, so we asked if Intel sees that resulting in confusion, in much the same way that Centrino was widely misunderstood as a newer, better kind of processor from Intel. For example, premium ultraportables will have this badge but high-end gaming and workstation laptops will not.

“I think the Evo brand marketing is very targeted to the users that it delivers for. I don’t think someone who wants a 15-inch gaming laptop is going to be confused about the brand promise of Evo vs what we can do with 10th or 11th Gen Core in gaming systems. The market is segmented; users have very specific needs that I think [match what] we’ve architected the platform and brand to.”

We confirmed that there are no Evo tiers or sub-categories beyond the Core i5 and Core i7 segmentation, but there will be an equivalent Evo platform with Intel’s VPro management features enabled for corporate environments. Interestingly, Walker said he expects Project Athena to influence the design of many more laptops beyond those that are sold with Evo badges.

“Project Athena is our way of working with multiple OEMs and ecosystem vendors to drive lower power and better responsiveness. Think of it this way: you’ll see technologies and things that we’ve done waterfall into much more mainstream [laptops] and lower price points,” he said. “Every year, we’ll do a new specification that keeps driving the platform forward. That means technologies that we did earlier like lower power [display] panels, connected modern standby; you’ll see these go broader-based throughout our Core product lineup. Over time Athena becomes an industry programme that we drive, and a broader vision for the laptop, and Evo will continue to be the best of those capabilities.” 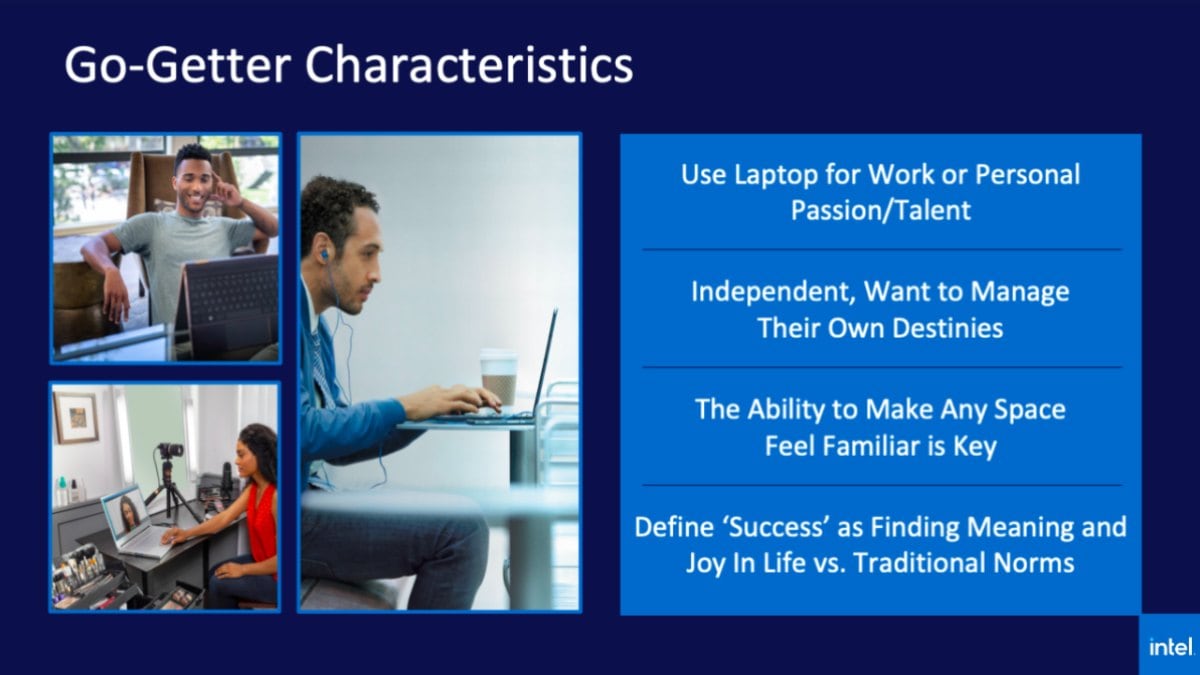 On that note, we come to Intel’s push for Thunderbolt 4, and also the new USB4, PCIe 4.0 and DDR5 standards debuting with the 11th Gen Tiger Lake generation, including Evo laptops. We asked Walker  how soon these standards will see wide adoption, and whether they come at the cost of heat and power consumption.

“Thunderbolt 4 is a requirement for the Evo platform brand but it is integrated into Tiger Lake and we expect to see pretty broad usage and activation in 11th Gen systems. That’s been growing rapidly, and we’ll continue to see it grow well beyond the Evo platform. The first wave [of Tiger Lake laptops] might have some PCIe 4.0 SSDs but PCIe 4.0-attached graphics and storage will probably be premium for a bit. I think overall you’ll see more DDR4 and LPDDR4, and it will take time once we introduce the next generation of memory technology support. There are always challenges with heat but we’ve continued to work with our partners for better cooling solutions, and to account for new technologies and speeds in terms of power architecture on the chip.”

Expanding on that, we asked how Intel plans to capitalise on this potential increase in reach for Thunderbolt, since compatible devices have so far been quite niche and expensive. What kinds of devices and use cases will Thunderbolt enable or improve?

Walker spoke about corporate as well as consumer use cases. “For our commercial buyers, it’s really becoming a factor for the next generation of single-cable docking. For the consumer, I expect to see it come out of the premium into the more mainstream segment. I think for the end user, especially as people are more at home, having just a single cable that can do your networking, dual monitors and high speed storage all at once, it’s just that ease of use where it just works. I think that you’ll see that in more and more systems. I think as the footprint of Thunderbolt-enabled systems grows, we’ll continue to see more and more peripheral devices, SSDs, docks, monitors, etc expanding, and prices do come down with that.”