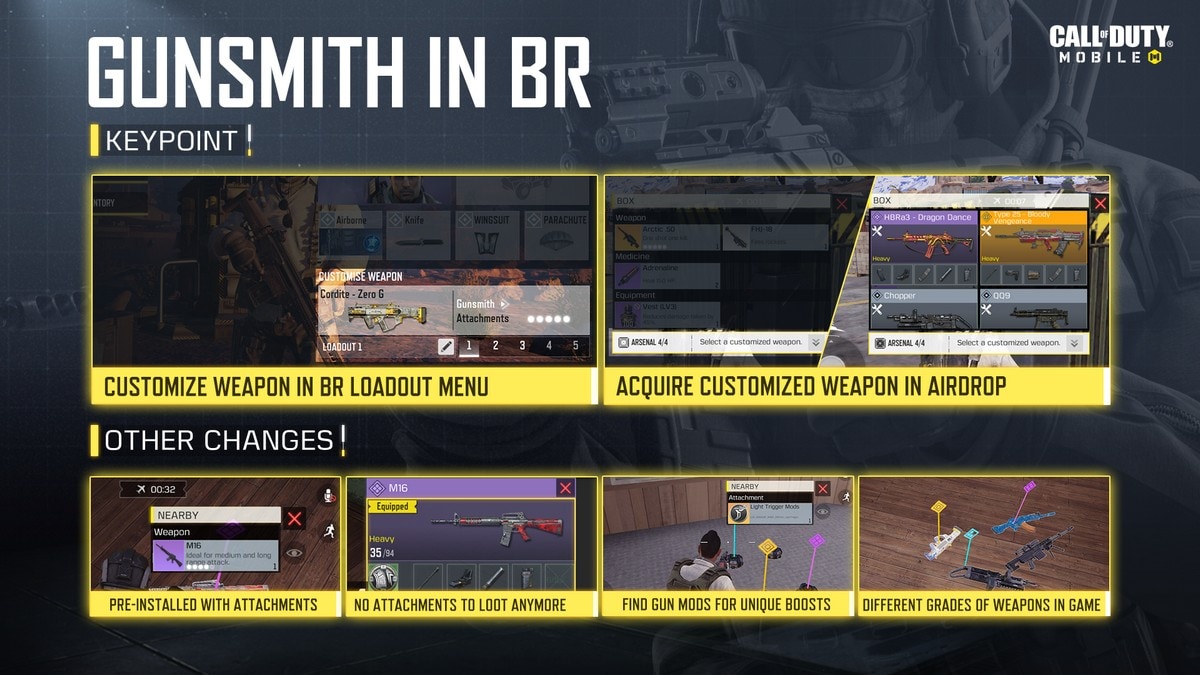 Call of Duty: Mobile will receive its Season 9 update on August 16, as announced by the game’s official Twitter account. The upcoming season is called ‘Conquest’ and will bring several new changes and features to the game, including new maps, modes, events, Gunsmith feature, and a new Ranked Series 6. There are some multiplayer and battle royale mode specific updates as well and the developers have described some of these changes in Season 9 through a Reddit post that was shared a few days ago.

As per the Reddit post by Call of Duty: Mobile team, there are several changes and features coming to the game with Season 9, the major ones being the Gunsmith feature and the Shipment 1944 map. Gunsmith allows players to customise their weapons to a greater extent with a myriad of attachments and better weapon data. There are stickers and skins that can be used to make each weapon unique.

Each weapons type has a weapon XP system. The developers have stated that all base weapons can be unlocked by just playing the game, completing Gunsmith missions, unlocking them with the free Battle Pass, or by owning or acquiring any variant of the gun. All Legendary or Epic variants of weapons in Call of Duty: Mobile can now be found via blueprints. Additionally, the developers state, “All weapon variants of a lower rarity are now camos that can be applied on your base weapon.” Reticles, charms, and stickers can also be used to customise weapons. The weapon variants can be levelled up to 50+.

The Shipment 1944 map will make its way to the stable version of Call of Duty: Mobile with Season 9, having initially launched for the public test build of the game. It is a Multiplayer map that has a small size and chaotic gameplay. It is a fast-paced map that will have players shooting right from the moment they spawn. The developers state that this map is ideal for practicing with different weapons and completing challenges or tasks.

Some of the multiplayer specific changes include a total of 10 loadout slots that can be unlocked. Each loadout can be equipped with a customised weapon or one of the new blueprint weapons. However, the update will reset the current loadouts. For the battle royale mode, players can find weapons of different rarities with pre-installed attachments while in a match, the attachments on the ground have been replaced with Gun Mods, there are five loadout slots now, and the customised weapons can now be acquired through Airdrops.

Detailed information on the new changes and features for Call of Duty: Mobile Season 9 can be expected when the update releases on August 16.

iPhone 13 May Have Up to 1TB Internal Storage and Improved LiDAR Sensors
WhatsApp Messenger Gets New Animation for Voice Messages and Disable Receipts on iOS With Latest Update
Twitter Spaces Rolling Out for Android Users Globally for Wider Testing
Apple Reopens All 270 Stores in US for First Time Since Pandemic Began
AMD Radeon RX 6700 XT With 12GB GDDR6 RAM, 40 Compute Units and 96MB Infinity Cache Launched